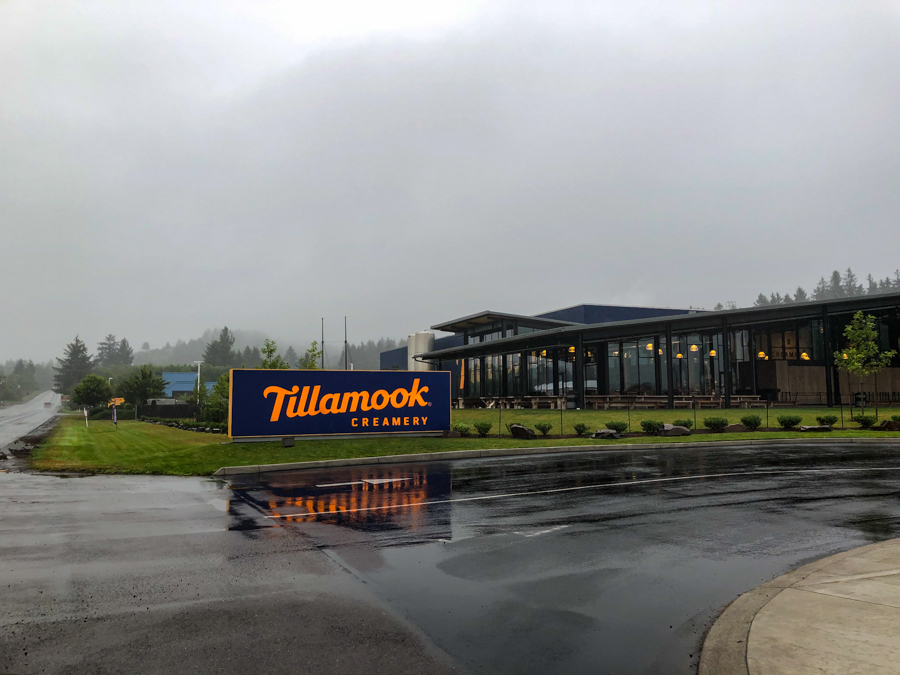 Okay…google maps, give me directions from Gold Beach, Oregon to Tillamook. Five and half hours!! Oh wow! We made a straight drive without any stops. Our destination was mainly for our tastebuds! Tillamook Creamery went above and beyond our expectations. My eyes bulged out when I saw how huge the creamery was. The building and parking lot was just massive! Even with the rain and gloomy clouds Tillamook is a fine looking structure.

We arrived with just enough time to dive right into their food. Of course every dish is made with Tillamook products. We skipped for now the self walking tour, and gift shop. We made a straight bee line to the cafeteria. Right away, I noticed the cleanliness of their equipment. I don’t think I’ve ever seen such a clean and organized cafeteria before. We ordered then the cashier gave us a pager to let us know when to get our food and sat down at the tables. By this time, we are starving. At first I thought when Daniel ordered, he ordered too much. As the hunger set in, I thought ugh, it’s probably not enough. He ordered the most popular dishes and we would share. I anxiously waited for the pager to go off. When it finally did, I was eager to help caryy the food over.

When you think of a cheese sandwich, you think of a homemade dinky one. The type of sandwich you settle for when you’ve run out of cold cuts. Hahaha! Nope not here! Should’ve known that the Lopez family would be fighting over the last bite. Now, the picture of the Tillamook cheddar cheese sandwich may not look like much in the picture, but dear God the gooey, soft, hot cheese makes the bread extra soft even though it was toasted. As I took a bite and pulled the sandwich away from my mouth it left a zip line of cheese. You had to break it with you fingers. Mmmmmm, melty cheese!!! One sandwich for three people did not cut it. So those of you that go, don’t plan on sharing.

The other popular dish we treated ourselves to was the Mac and cheese. This dish was like a triple threat of all Mac and cheeses. It had a combination of Colby jack, medium cheddar, and Monterey Jack. On top of it were toasted bread crumbs, it gave it a little bit of a crunch. It was served in an iron skillet bowl. What a nice added touch because it stayed pretty warm as we enjoyed every morsel.

The last item we ordered were fries with MORE cheese on top. O-M-Gee! The creamy sauce on top was just every cheese lover’s dream. By this point, I had my share of the sandwich and went all in on the Mac and cheese. So I had little room for the cheesy fries. I did try them but I was stuffed.

I don’t know how my boys did it, but they had enough room for ice cream. They didn’t want to leave without at least trying it so they shared a cup of the Caramel Buttered Pecan. He described it as a delightful buttery treat in a cup.

We could only take a quick look around because Tillamook was about to close. Which was a shame however it was less crowded and no lines for the food, and ice cream. We didn’t do any shopping at the gift shop and grocery section there because they had already shut down their registers. We took some pictures of Diego in the Tillamook’s VW bus. We decided that we would come back the next day.

The next day, we stopped in. This time it was packed! You can imagine the parking. Daniel dropped us off and we went in to get more ice cream and chocolate milk. I didn’t get a chance to try it and I wasn’t leaving without at least tasting it. Diego had his eyes on a small jug of Alpenrose Swiss Supreme chocolate milk in their grocery section. We waited in line and looked over the menu. It was going to be challenging to pick one out. Check out the menu there are many to choose from!

All Diego wanted was a basic chocolate ice cream. I noticed ahead of me that people were asking to try out the flavors, which explained the wait of the line. When it was our turn, I asked the gentleman helping us what his favorite flavor was, he told me Marionberry Pie. I tried that one, it was ooookay. A lady was next to him, she said her favorite was the birthday cake. I tried it and she was right. It was soooo delicious. I would’ve never have picked that one, but they do work there so they would know better.

We had a great foodie experience at Tillamook. If you feel like eating something decadent and worth while Tillamook creamery is a must do in Tillamook, Oregon.