Being one of the most popular National Parks in the U.S., we had to include the Grand Canyon on our list of stops. Although we had heard that the north rim was a bit more secluded and more scenic, it would have been out of the way and harder to access, so we decided to go to the south rim. Another bonus was that coming from Lake Powell, the iconic Horseshoe Bend was along our route. 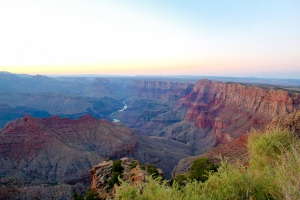 Upon arrival, we found that there were a lot of other people with the same idea. Although the crowds were a bit excessive, we found that the further we got from the south entrance and visitor center, the less people we saw. We also found that most people visiting just wanted to see the views from the numerous “view point” parking lots, and by simply taking a short walk down any of the trails, we were able to find seclusion. There is a reason why The Grand Canyon is one of the most visited national parks in the U.S. This place really is amazing. It is hard to believe that one little river could carve such a massive canyon.

Another bonus about visiting the south rim was the awesome campsite we found. We were able to stay at a beautiful forested campsite less than five minutes from the canyon for FREE! Even though there were other people camped at this spot, there was enough space for it to still feel private. The boondocking sites are located along Coconino Rim Road, which is accessed from within the park. After turning on this dirt road you soon leave the park, and once you pass the cattle guard, you are free to camp wherever you like. We liked this spot so much that we decided to stay an extra couple of days. We even found a nice spot to put up the hammock.

One of the things we really liked about this park was that even though there were tons of hiking options, you could also access most views from the roadside pullouts. Sometimes it is nice to just relax and soak in the view from the comfort of your bed.