Independent, business owner, traveler, badass – these are just a few words I would use to describe my latest interviewee. I was elated that she took time out to speak with me even in the midst of traveling and preparing for her next race. Looking through her pictures there were so many things I wanted to know… about her bikes, her travels, and her experience being a woman in a male dominated world.

Raven travels in a newly renovated Sprinter van after giving up her beloved vanagon. She says that sprinters are just more reliable when you’re traveling across the country as much as she does. That’s not to say that she couldn’t figure out how to fix things if they broke because she has learned so much since starting her journey. I talked with her about how she learned the mechanics of the bikes she fell in love with and her answer was quite simple she learned as she went along being able to shadow some of the great mechanics in her community. If you follow her on Instagram you know that she is a bike fanatic and races every chance she gets. In her repertoire are vespas, track bikes, vintage racers, scramblers, etc. I am so envious of how many bikes she’s able to play with!

We also talked about how she is able to be so free and it is because she works really, really hard. She runs her own business remotely and is super successful. She makes her own schedule and picks her own clients. There are very few people who can say they have so much control over their work/life balance and she does it so gracefully. I was truly in awe of the ambition she exuded. We discussed her philosophy on such things and her take on it is that you have to continue to strive for the best. She doesn’t travel because she wants to be wispy, she travels because she loves bikes and wants to catch these great races. She follows her dreams and works hard to make sure she can continue following them. 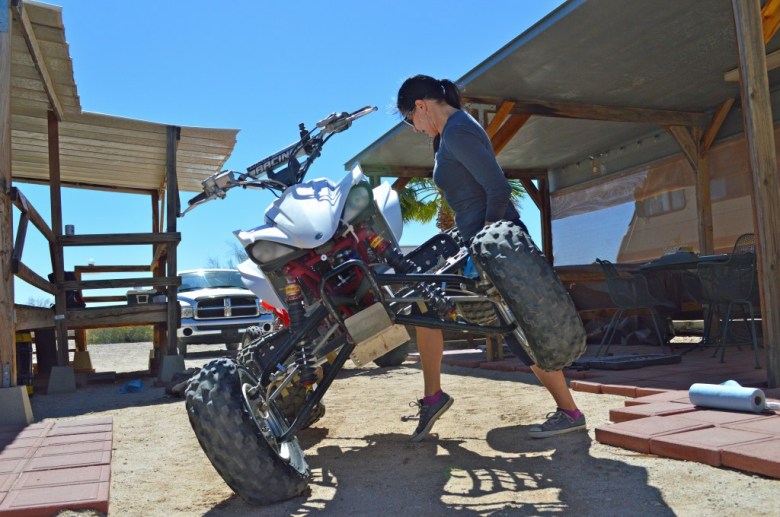 As a self-proclaimed perfectionist with lots of plans for life I could see definite similarities between Raven and I. She even suggested that I do a photo shoot of her and her new babies, Thing One and Thing Two as she has called them, a set of twin cl350 race bikes she is currently hauling to the AHRMA vintage opening race. She was so open and willing to share whatever I wanted to know which is a rare occurrence these days. I was so happy to speak with Raven and hope that she continues to enjoy her time traveling and just generally being a total badass. If you want to see more of Raventurous follow her on Instagram and check out her awesome blog!! Talk to you soon, Raven!

**All photos used belong to Raven Fischer via her blog**